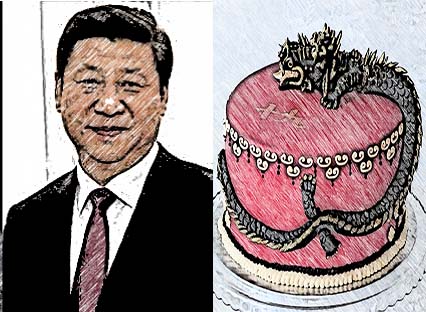 Xi: Having his cake and eating it, too

In his opening speech at the 19th National Congress for the Communist Party, Chinese President Xi Jinping said he wants the market to be the “decisive” mechanism in the economy, reiterating a pledge he made 5 years ago when first taking office.  In the same speech, Xi also said that he wants the state-controlled sector to be “stronger, better, and bigger.”  In other words, Xi wants his cake and wants to eat it, too.  He wants an economy that is both market-oriented AND has heavy state involvement.

Straddling the fence between the state and the market

Of course, Xi isn’t the first politician in history to talk on both sides of an issue.  In the US we have politicians who preach fiscal discipline while simultaneously proposing major spending programs.  We have learned that it is important to focus on what politicians do, not what they say.  We’ve also learned that, in terms of competing goals, reducing the deficit never wins!

This National Congress comes at a particularly interesting time.  Growth has slowed in China.  Debt has risen to a dangerously high level.  While small reform measures are ongoing, major reform has been scant over the last 10 years or so.  Because Xi promised to make the market “decisive” and then failed to make major reforms, many wonder if he was ever serious.  There is a line of thinking that says, if Xi doesn’t make a strong commitment to revitalizing reform at this Congress meeting, he never will, which means we can rule out major reforms for at least the next five years, if not longer.  It isn’t an exaggeration to say that many are wondering if the path that brought China to this point—the path of economic liberalization—will be China’s path in the future.

The Congress meeting itself is unlikely to include major policy announcements.  Those will come later, if at all.  Nevertheless, there will no doubt be countless pundits opining on the meaning and significance of each word uttered (as I am right now).  Below we’ll quickly review some of the points you’re likely to hear from those trying ascertain China’s future course, hopefully presented in a way that helps you make up your own mind.

China has grown because China is moving toward the free market

Some people say China was never serious about reform and that China has been growing only because it has been cheating.   But that ignores the fact that, 40 years ago, China’s economy was 100% state-owned and is now less than 50% state-owned.  This turn toward the free market propelled China’s growth.  If the reforms weren’t real the growth wouldn’t be real.

Free market reform slowed down some years ago

Some will tell you China reversed its course on economic reform ten years ago or so, when significant reform slowed and Chinese economic nationalism became more pronounced.  But if that’s true, why did some reforms, like internationalization of the currency, made good progress after 2010? Plus, China’s private sector has boomed over the last ten years, including the automobile market, retail and luxury, and tech, all of which are dominated by foreign and/or entrepreneurial firms.  It is hard to argue China has eschewed the private sector when the private sector is doing so well.

Xi has dragged feet on reform and piled on the debt

As mentioned above, when taking office in 2012, Xi signaled he would reignite reforms.  He didn’t.  Instead, Xi worked furiously to consolidate his own power.  He also continued the unsustainable debt creation that began before he took office.  Optimists hoped he was consolidating power so he could overcome those who oppose reform.  They also thought maybe it was the debt that was slowing reform. Maybe Xi wants to tame the debt first and then move forward with reform.

Despite free market rhetoric, there are signs that Xi prefers a state dominated economy

For those trying to read the tea leaves in the hopes of major reforms, reasons for optimism have been difficult to find.  There are many examples. I’ll mention two.  First, instead of forcing huge, inefficient state-owned enterprises to face more competition, Xi has ordered them to merge, creating huger state-owned enterprises that are unlikely to be more efficient.  Another recent idea is that the the government should buy a small stake in each of China’s highly successful and entrepreneurial tech companies.  While this act itself would not have a major economic impact, this idea is deeply troubling because it is absolutely tone-deaf to the realities of a private, entrepreneurial economy and seems to indicate that Xi literally thinks the state should directly touch everything in society.  Ideas like these do not lend confidence to the notion that Xi is a true reformer.

No decisive indication at the 19th National Congress

It is against this backdrop that we enter the 19th National Congress, looking for signs that Xi is about to deliver on his promise of market decisiveness.  Instead, we get more rhetorical fence sitting, more vague promises about opening up, and a grand vision for a pumped up, muscular state as far as the eye can see.  This is not what the pro-reformers had in mind.

Bleak as this sounds, it is far too early to lose faith in China’s future.  Xi said the market is important.  He also said he intends to open more sectors to foreigners.  Xi has room to reform parts of the economy without disturbing his overall goal of ensuring the supremacy of the party.  He is likely to choose that course.  If he does so and also addresses China’s debt problem, then China’s short and even medium term prospects can remain bright.

But if President Xi and his successors think they can make China a fully developed society, on a par with the US, Europe, Japan and the others, while also having the state play such an enormous role in the economy and society, then I think Xi and China might have to relearn a lesson that should be fairly obvious.  The only reason China is able to dream of being an advanced, prosperous nation is because of economic reform.  Stop the reform, the dream dies.

Who wins a trade war between the US and China?

Is Trump Finally Going to Get Tough on Trade with China?