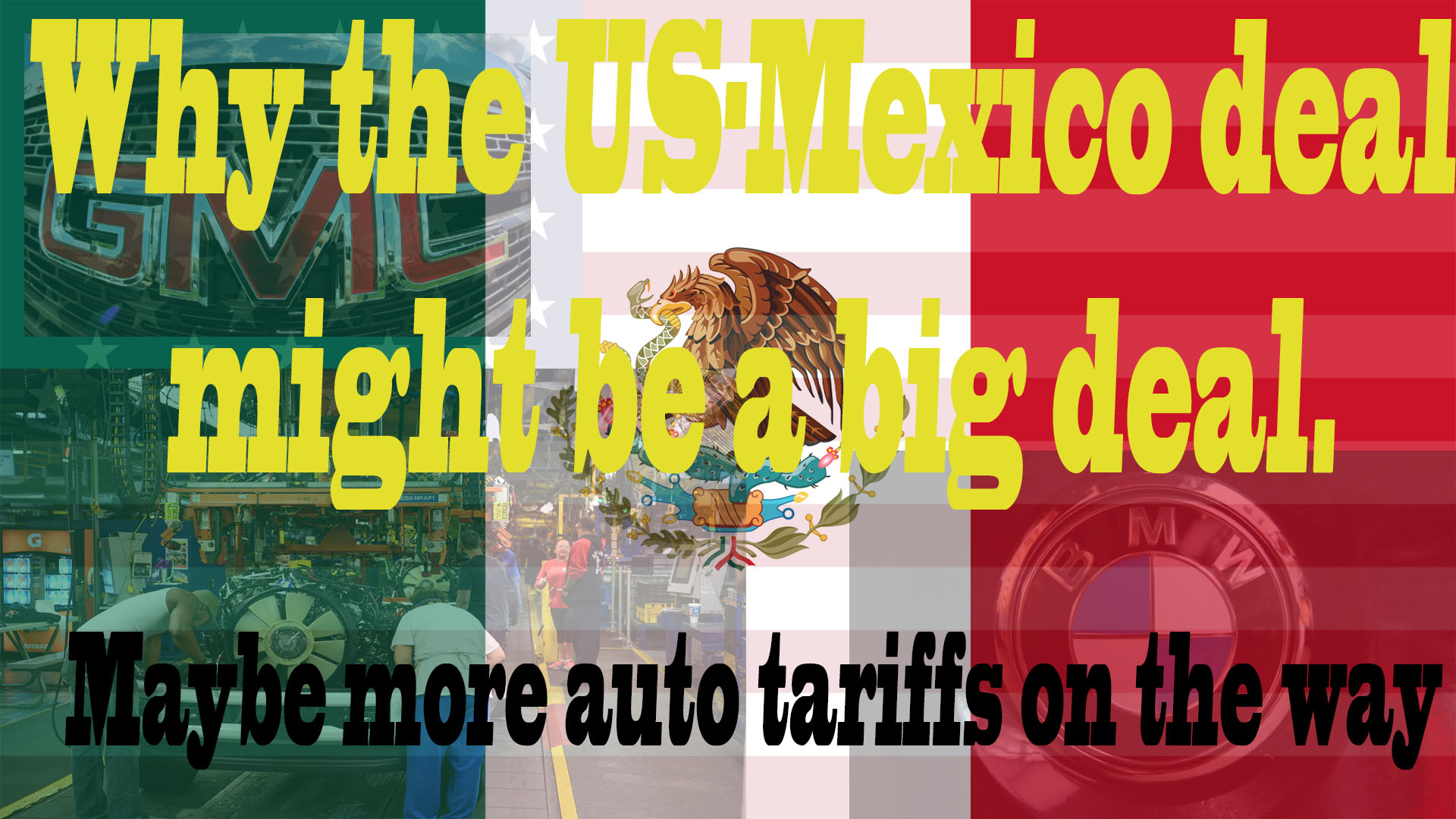 Why the US-Mexico Deal Could be a Big Deal

The US-Mexico trade deal virtually assures that it will become more expensive to make cars in Mexico, which raises the possibility that some auto manufacturing will leave Mexico.  But those jobs won’t necessarily return to the US, unless the US makes it equally expensive to make cars in other countries.  This is why the Mexico deal might just be the first step toward a broad tariff on autos, which could have a huge impact on the US economy.

Let’s start the analysis with the ways in which the agreement with Mexico will increase costs in Mexico.  First, the local content requirement that allows cars from Mexico to be imported duty-free to the US will be increased from 62.5% to 75%.  Secondly, in order to avoid the tariff, 40-45% of the value of any car must be made by labor that earns at least $16 per hour.  So Mexico will have higher parts and labor costs, which raises the possibility that Mexico will become less cost competitive.

US Tariff on Autos outside of NAFTA is not high

Next, consider the tariffs situation.  The American tariff rate on imported light trucks is 25%.  Europe’s tariff on imported cars is 10%.  By comparison, America’s 2.5% tariff on cars isn’t that hefty, which is why Japan, South Korea, and Germany all do fairly well exporting to the US while simply absorbing the 2.5% tariff.

Car companies could keep manufacturing in Mexico and absorb the tariff

Car companies operating in Mexico could do the same.  They could simply absorb the tariff and disregard the content and wage rules.  Or, they could move production to even lower cost countries (like China, Vietnam, or elsewhere) which will make it easier to absorb the tariff.  The best way for the US to avoid this outcome is to increase the overall tariff on any auto imported into the US.

The light truck market is a good example.  As long as the 25% tariff remains in place but exempted for NAFTA countries, companies will be highly incentivized to make pickup trucks in either the US, Mexico, or Canada.  So for light trucks, it possible that jobs will be relocated to the US, since the high tariff makes it prohibitive to manufacture elsewhere.  But a skimpy 2.5% tariff is more easily sloughed off, which means that, while Mexico might lose, US workers might not win.  This sets the stage for the Trump administration to raise the broader US tariff on autos to a more impactful level.

Larger impact: Higher prices for autos or more jobs in US

If this occurs then automobiles will become an excellent test case for the free trade debate.  A broad tariff would definitely raise the price of imported cars.  One side of the trade debate thinks this will lead to more automobile jobs in the US.  The other side of the debate says that higher import prices will be matched by higher domestic prices which will combine to increase the cost of an automobile which will result in less autos being bought and less consumer spending in general, the combined effect of which will be less jobs in the US, not more.

If minimum wage is new precedent, could have huge impact

Would higher prices or more jobs have greater impact on US?

One side of the trade debate thinks that competition from low wage countries is unfair and that restricting such imports would create jobs in the US.  The other side of the trade debate would say that lower prices help Americans stretch a dollar which creates more demand for other products and services.  Furthermore, the other side would say, as the American economy grows and becomes more modern, we should expect that jobs would become less menial and more value-added, so we shouldn’t expect to hold on to the jobs at the bottom of the value chain.  So, if America begins to insist on minimum wages for trade partners, would jobs rush back to America?  Or would price increases become a drag on the US economy?

Is China the Big, Bad Wolf of the Steel Industry, Part 2