In three graphs we explain why steel tariffs won’t help the US steel industry.

Technology and productivity are the reasons for declining steel employment, not imports 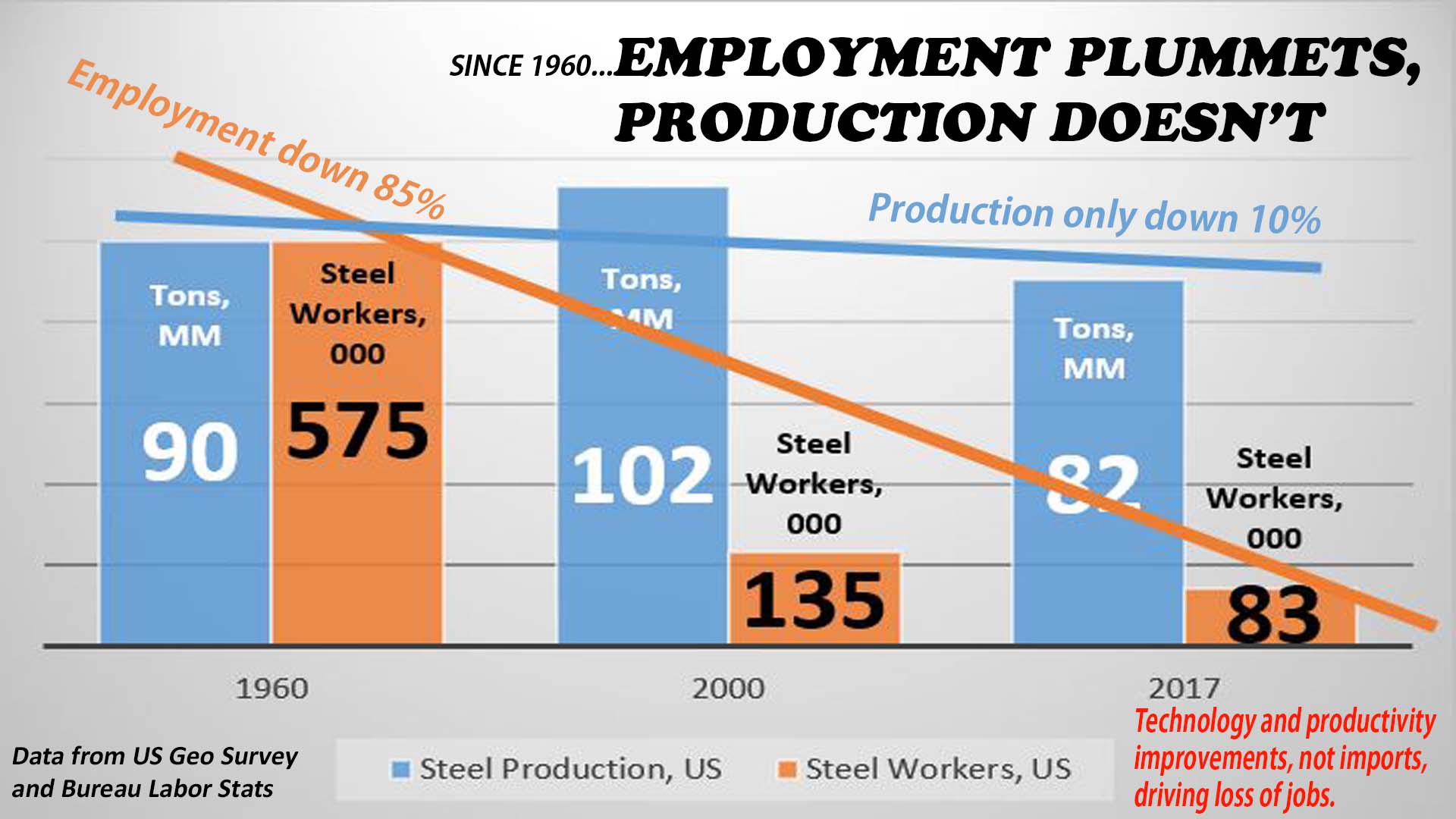 85% decrease in steel worker employment but only 10% reduction in steel production. Productivity increases appear to be behind job losses.

The second bar (orange, showing thousands of steel workers), reflects the dramatic decline that has occurred in steel industry employment, falling by 85% since 1960.  Of the roughly 500,000 steel jobs that have disappeared, roughly 90%, or 450,000, occurred before the year 2000.

The point is that technology and productivity improvements in the steel industry have had a huge impact on employment.  Modernization has fundamentally altered the employment needs of steel, and most of the transition occurred more than two decades ago.

Global production explodes but US imports do not

The US’s net steel imports are actually not that high, either historically or compared to other countries 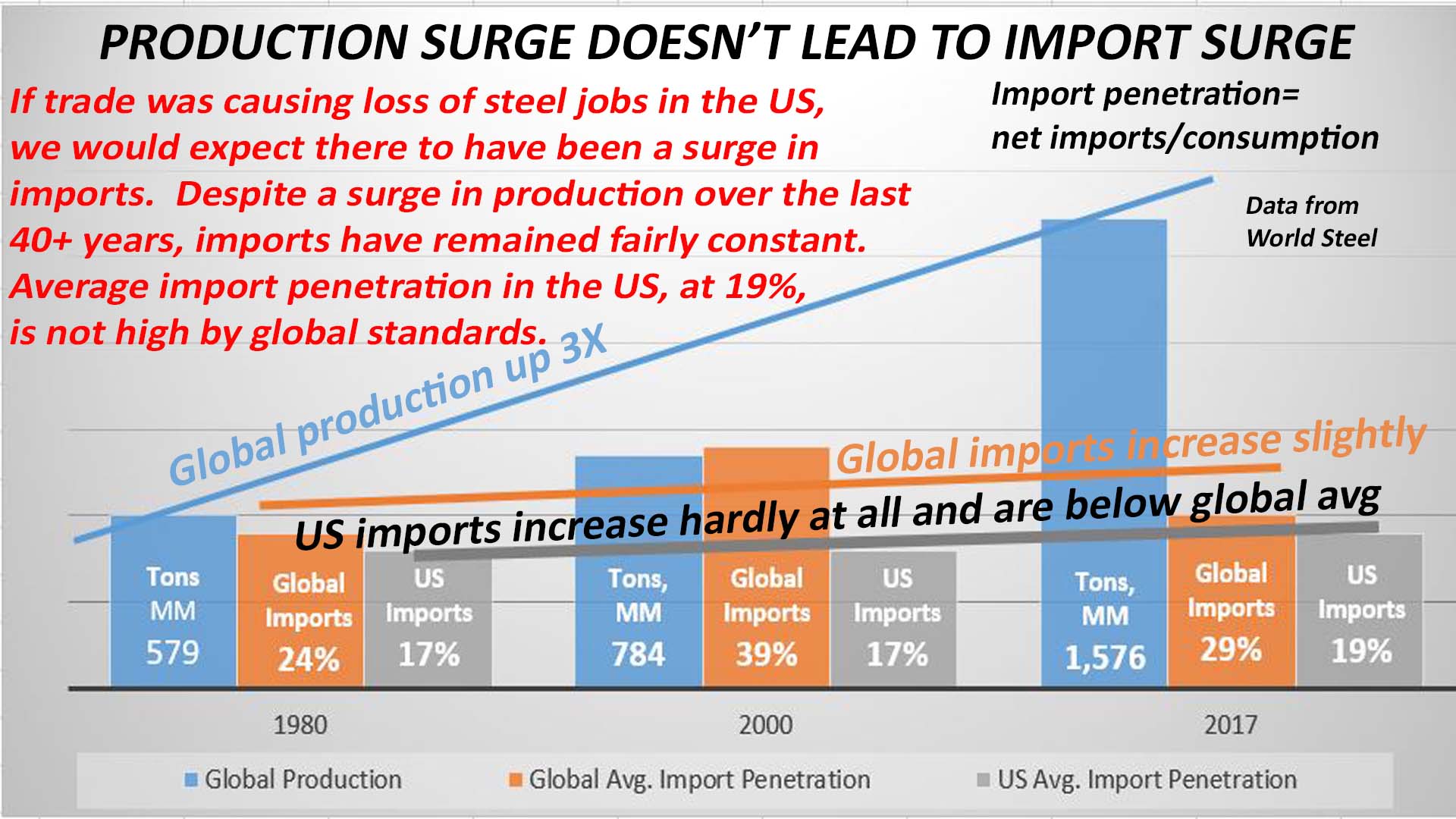 Surge in global steel production did not lead to a surge in net steel imports to the US.

The first bar (blue, showing millions of tons of production), shows that global production of steel has almost tripled since 1975, a huge increase.

The second bar (orange, showing Global Imports %), shows the percentage of steel production that is traded (exported and imported).  The amount of imports rose prior to 2000, but has actually fallen below 30%, closer to levels before 1980.

The third bar (gray, showing US Imports %) shows how much steel the US is importing as a percentage of consumption.

If US steel employment were victim to unfair foreign competition, we would expect to see a huge surge in steel trade and US imports.  Such a surge has not really occurred.  Some industries, like apparel or electronics, have huge export ratios (above 75% or so).  Steel is not such an industry.  Despite a huge increase in steel production, the amount of steel that is exported globally has not increased markedly, showing that steel is made mostly for domestic consumption.  Furthermore, it is interesting to note that the US rate of imports is actually significantly less than the global average.  The US still makes roughly 80% of the steel it uses.  That’s actually a fairly high number, not what would be expected if the US were under an onslaught of unfair foreign competition. 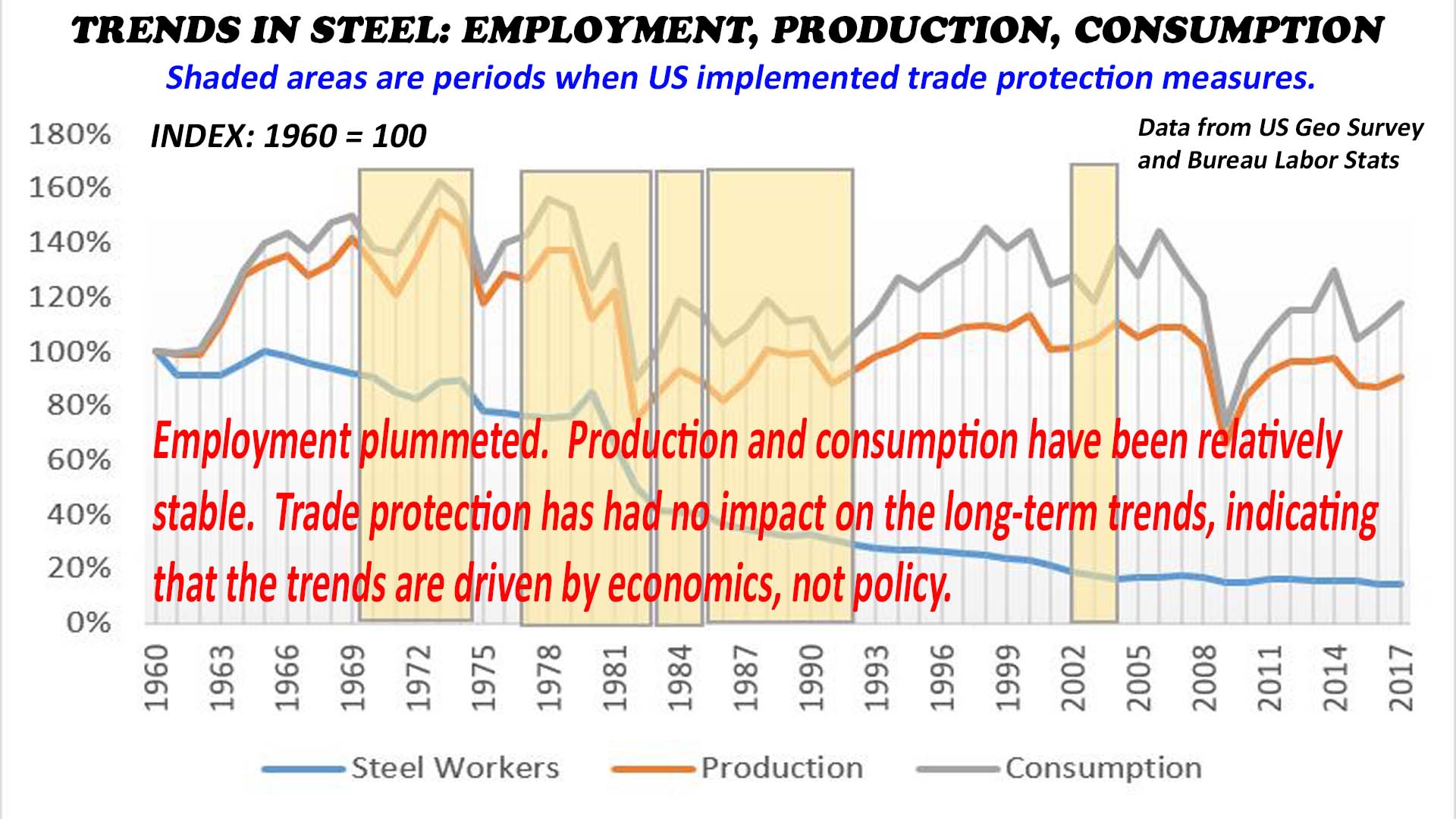 Past import restrictions have not impacted long-term trends in the steel industry.

This graph is similar to Figure 1, except in line form, not a bar graph.

The lowest line (blue, showing steel workers) shows that steel industry employment has plummeted since 1960, experiencing an 85% decline over that period.

The gray, vertical bars show the periods when the US implemented trade barriers on behalf of the US trade steel industry.  There are five periods in total, starting in the 1970’s.

The point is that there is no evidence that any of the trade barriers had any impact on the long-term trends in the steel industry, including employment, production, and consumption.  In fact, steel has been one of the most protected major industries in the US over the years, and yet the fact remains that:

Based on the above evidence, the most reasonable conclusions to reach are as follows: