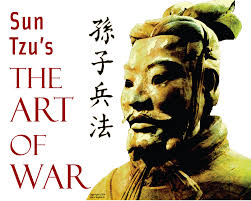 According to Sun Tzu’s The Art of War, the five dangerous faults which may affect a general include the following: 1.) Recklessness, which leads to destruction; 2.) a hasty temper, which can be provoked by insults; and 3.) a delicacy of honor which is sensitive to shame.  It’s almost as if the Chinese have been waiting two thousand years for Donald Trump to show up.

Sun Tzu also says that “If your opponent is of choleric temper, seek to irritate him.”  If Trump wins the White House, should we expect the first cross-border “irritation campaign” in history?

Donald Trump is tooting his own horn as a skilled negotiator, particularly as relates to China.  This is interesting because the Chinese are widely considered to be black-belt negotiators as well.  If it happens it should be a fascinating match up.

For the Chinese, the ultimate book of strategy, as pertains to just about everything (war, diplomacy, business, negotiation, etc.) is the The Art of War, written by military strategist Sun Tzu in the 5th century BC.  As to Donald Trump’s approach, we have his own thoughts as expressed in his self-penned treatise, The Art of the Deal.  Given that Donald Trump has accused China of “raping” the US on trade and his promise to use his keen negotiating skills to remedy this situation, it is appropriate to wonder how the “Art of the Deal” approach might fair against the “Art of War.”

“All warfare is based on deception.”

“All warfare is based on deception.”  This is the most famous line from The Art of War and fairly represents the most dominant theme put forth by Sun Tzu: conceal your intentions, be crafty and strategic, use your opponent’s strengths against him.   For example, Sun Tzu says…

More in common than we think

These type of subtle tactics would seem to contrast with Donald Trump’s more direct personality.  Yet, in the Art of the Deal, Trump insists he’s not a gambler.  He says he pays more attention to protecting the downside than maximizing the upside and he keeps his options open in case his main goal is unattainable.  So maybe Trump has a little “Sun Tzu” in him after all, i.e., the ability to be flexible and crafty.  That should make for an interesting match against China.

How much leverage with Trump employ?

Two of the stratagems advised by Trump in The Art of the Deal could prove to be particularly relevant to negotiations with China.  The first is “use your leverage” which Trump says is key to success.  As with most negotiations, leverage, and not any particular negotiating tactic, is likely to carry the day.  For example, Trump has suggested he will slap a 45% tariff on China.  That is a very heavy-handed use of leverage.  The problem is, if we use a big stick of leverage, in all likelihood, so will China.  That much leverage might result in both sides losing.

Does Trump really know the opposing side?

Lastly, Trump says you have to “know your market” which Trump says is best done by relying on instinct as opposed to outside opinions.  Mr. Trump has also said many times that he knows the Chinese well.  As someone who has spent a great deal of time in China, I can only say that I’m not completely convinced this is true.  I would remind Mr. Trump of what happened when EBay entered China.  Jack Ma, CEO of Alibaba, said “EBay may be a shark in the ocean, but I am a crocodile in the Yangtze River. If we fight in the ocean, we lose—but if we fight in the river, we win.”  Three years later EBay withdrew from China and Alibaba is now a much larger company then EBay, showing that it really is important to understand China when dealing with China.

Politicians frequently claim they will take a hard line on a particular issue.  Less typical is for a candidate to claim that negotiating prowess will lead to great results.  Then again, Donald Trump is anything but a typical candidate.  So, in his case, he might be right.  If he wins the White House and he really wants to out-negotiate the Chinese, I recommend he think long and hard about his leverage and how he wants to use it.  I also hope he brings to the negotiating table a healthy understanding of China’s position and perspective.  After all, this won’t be China’s first negotiation.  They’ve been at it since at least the 5th century BC.