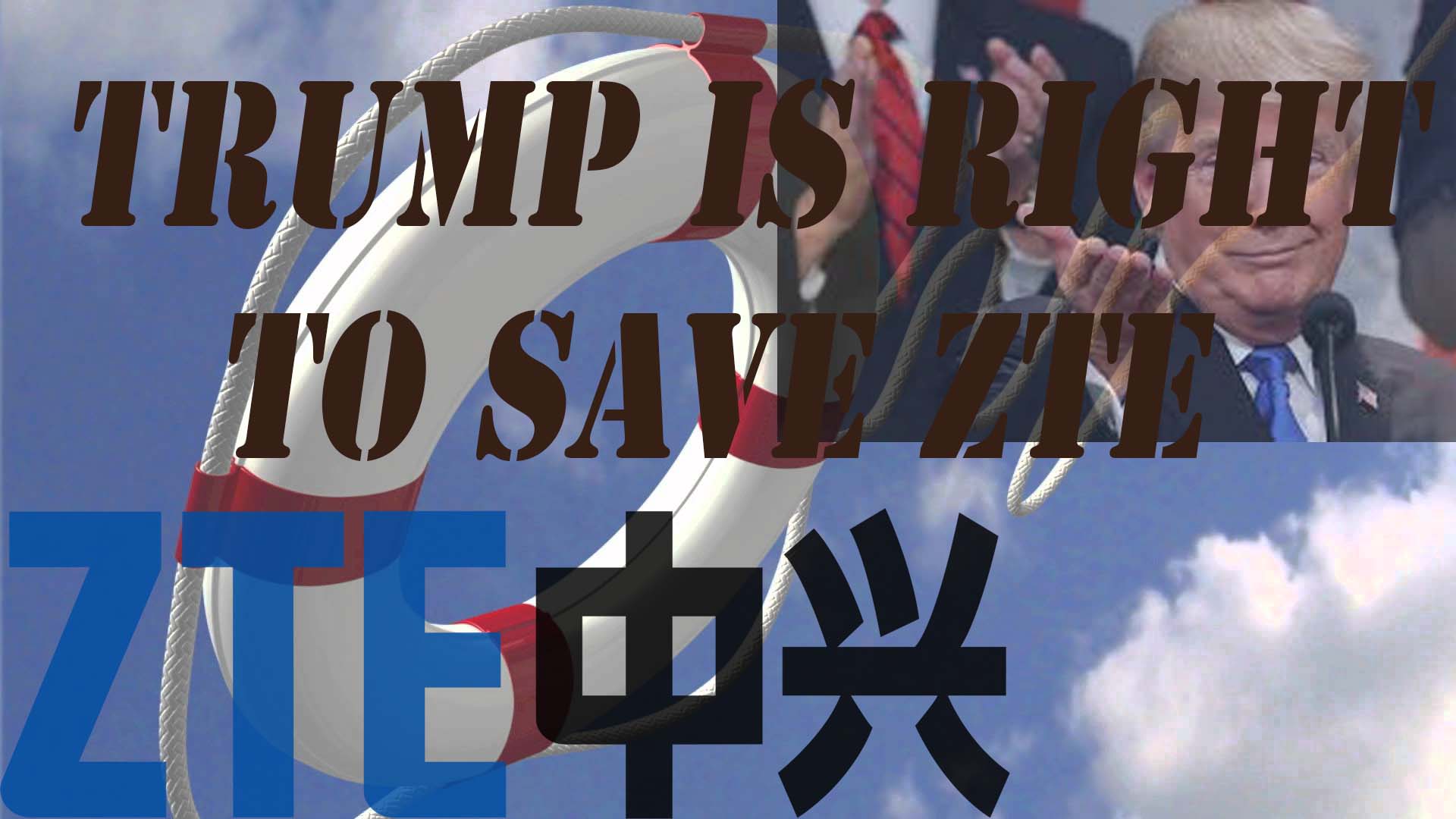 Senators are lining up to tell Trump he shouldn’t cut Chinese company ZTE any slack.  They’re wrong.  Trump is right.  Here’s why.

Punishment should fit the crime

They’re main argument is that the rule of law should not be intermingled with outside issues like trade negotiations.  But within our system of law, “the punishment should fit the crime” is a well accepted principle.  Plus, within our system, it is not unusual for the judge to have a certain amount of discretion when it comes to sentencing, including the ability to consider factors outside of the infraction at hand.  This is what Trump is doing relative to ZTE.

An investigation concluded that ZTE had violated sanctions against countries like Iran and North Korea from 2011-16.  ZTE has already paid a substantial fine and there are no new assertions relative to recent sanction violations.  The additional penalty comes from ZTE not following through on all of its promised remedial actions, particularly dismissing employees who actually executed the violations.  Because ZTE only completed part of its agreed remedial actions, the Treasury Department decided to ban US companies from doing business with ZTE.  Because so much of its key componentry comes from American companies, that punishment has an extremely severe impact on ZTE, almost a death penalty.

Alternative punishment, not reprieve, is the right course

President Trump is not suggesting that ZTE not be punished.  He is merely suggesting that an alternative punishment that does not directly threaten ZTE’s existence would be more reasonable.  He is right.  A further financial penalty could be assessed.  The US could demand ZTE immediately fulfill the other parts of its remedial plan.  The US could even mandate additional ZTE personnel be sanctioned.  Such financial and personnel related punishments are typical and can be highly deterrent.  There is no reason to cripple ZTE in order for the US to make its point and appropriately enforce its laws.

Here’s another factor Trump is likely considering that the senators aren’t.  This might not be a popular notion at this time, but consider this situation from the Chinese perspective.  The countries under US sanction aren’t necessarily China’s enemies.  We are crippling a major Chinese company, a symbol of China’s rise, in order to advance America’s foreign policy, not China’s.  It would be different if ZTE had actually spied on US citizens or perpetrated some extreme intellectual property violation against a US company.  But such accusations have not been made.  The penalty is rather severe, given the circumstances.  The Chinese people, not just the Chinese government, will be incensed by this.  It will feed China’s economic nationalism, making it easier for President Xi to follow through on his entire nationalistic, industrial policy program.

US has options.  Should choose the best one

It’s not like America doesn’t have other options.  We can enforce a severe penalty that doesn’t threaten ZTE’s existence.  We can take a hardline on a myriad of other issues.  Our negotiations with China have barely started.  We can still enact tariffs, quotas, and other restrictions.  But these type of actions tend to have a broad impact.  They don’t bury one specific company.  Taking ZTE down would be a finger in China’s eye.  This is not the way to make the point that the US will not be pushed around anymore.

“So what!?” say the hardliners.  “They are getting what they deserve.”  But are they, really?  While ZTE may have violated economic sanction laws, to a certain extent, the company is in this position because they played by the right economic rules.  The company became a good customer to a host of US companies, buying American products at market prices.  Our punishment should make the behavior that led to the transgression less attractive.  We shouldn’t make it less attractive to be a customer of American companies.

Ironic that Trump is now being called weak on China

Lastly, this case serves as a great illustration as to why free trade, despite so much opposition, continues to advance.  Donald Trump has hewed the most hardline, protectionist platform in decades.  Trump can be accused of many things, but being weak isn’t one of them.  Yet these senators are now calling Trump a wimp, saying he’s being weak on ZTE and China.  Maybe they hold this opinion because they don’t feel the heat of being responsible for how Apple, GM, GE, and other American companies are treated in China.  When you’re looking at the big picture, assessing the leverage both sides have, being reasonable often becomes more attractive than the hardline.  America doesn’t have to let ZTE off the hook.  Other punishments are available.  America doesn’t have to go soft on China.  The US can still push hard for fairer trade relations.  But crippling ZTE is more likely to hurt than help America’s efforts in this regard.  Trump is right to find another way to put the pressure on China other than by channeling that pressure through ZTE.