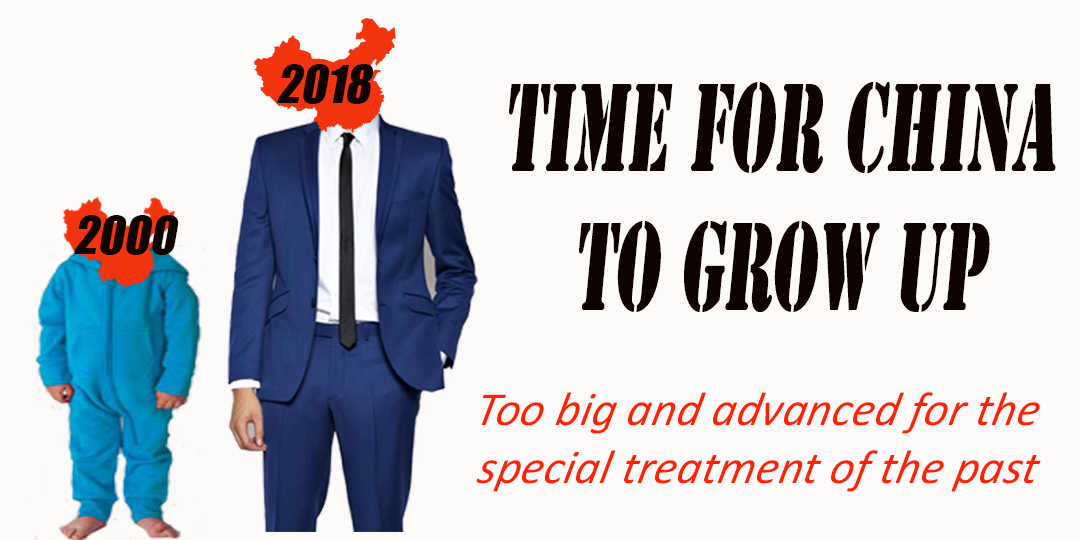 It’s time for China to Grow Up

“Keep a low profile and bide your time.”

For three decades, Chinese foreign policy was guided by Deng Xiaoping’s cautious advice—until the arrival of China’s current president, Xi Jinping.  From the building of installations in the South China Sea to starting a development bank (Asia Infrastructure Investment Bank) to promulgating the One Belt One Road initiative (Chinese-sponsored infrastructure spending throughout much of Asia and beyond), Xi has signaled that China’s time has arrived.  No more biding.  China is ready for the world stage, eager to play a leadership role.   If that is the case, then the same principle should be applied to China’s economy.  No more special treatment.  No more exceptions.  It’s time for China’s economy to grow up, to treat other countries the same way they treat China.

A common narrative in the US is that China cheats and that, because it cheats it wins and its trade surplus is the prize it earns.  This isn’t true.  Germany and Japan tend to have trade surpluses but their economies aren’t healthier than America’s.  Plus, India, Russia, Brazil, and virtually every other less developed country in the world are all highly protectionist, yet China has outperformed them all.  The correlation between free trade and prosperity and growth is very high.  There must be some other explanation for China’s incredible success over the last 40 years.

The explanation is simple—economic liberalization.  China has experienced tremendous growth because it has gradually turned toward the free market, from completely communist in 1980 (100% government controlled) to an economy that is now roughly 60% free market oriented and 40% government dominated.  China’s ability to compete in global markets, initially on cost alone, and to sustain its reforms, is why it has surged ahead of most of its peers.  China has a trade surplus because, when you are poor, you can’t buy much, but you can sell lots of high-labor-content goods like clothes and shoes and assembled computers.  As China’s wealth has increased, so has its imports, which is why imports have increase much faster than exports over the last decade or so (except when interrupted by the global recession).

Unlike ten years ago, China is now both customer and competitor

For a while, this gap didn’t matter much, since China didn’t have much money to spend.  However, over the last decade or so, the gap has grown into a major concern for multiple reasons.  First, China has slowed its overall liberalization, with the result that the inbound liberalization has not been able to catch up to the outbound liberalization.  Secondly, whereas China used to be too poor to be anything but a low-cost exporter, not it has the wealth and sophistication to be a major customer, competitor, and global investor.

Since China has reached a new stage of development, so must its policies

To put it directly, while the gap between inbound and outbound liberalization was acceptable when China had little money to spend, no capital to invest, and was not much of a competitor, now that it is a strategically critical market, has capital to invest overseas and can acquire foreign technology, and has the goal and means to become a leading competitor in global markets, that gap is simply unacceptable.  It is one thing to restrict your own market.  It is something else to buy foreign technology and then prevent foreigners from competing in your home market.

Trump gets the attention, but the ball is in Xi’s court

Five years ago President Xi promised to make the market “decisive” in the Chinese economy, a commitment to continued economic liberalization that he has reiterated countless times, including in his speech this week to the Boao Forum in China.  Yet, since the initial pledge, he has slow-rolled reforms and loaded China with debt.  This is not a recipe for long-term success, which is evidenced in part by China’s slowing growth rate.  China needs open markets, competition, and continued reform if it is to continue to develop.  In fact, China needs these changes with or without outside pressure from Donald Trump or anyone else.  Trump gets all the attention but the ball is really in Xi’s court.  Xi no longer bides time when it comes to China’s foreign policy.  If he takes the same approach to economic reform, pushing ahead instead of holding back, everyone will benefit.