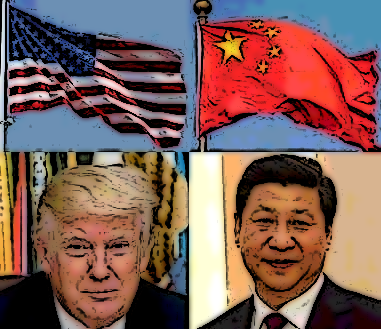 Is Trump Finally Going to Get Tough on Trade with China?

Candidate Donald Trump said China is “raping” the US on trade and that China’s trade surplus constituted a huge transfer of wealth from the US to China.  He said that he would not only get tough with China on trade, he said he would do it fast, so fast that jobs lost to China would come flooding back to the US.  It’s been ten months.  There’s been little in the way of “tough” and nothing has happened very fast (although, thankfully, and for other reasons, the job market is actually doing fairly well).  As Trump heads to China for the first time as President, it is reasonable for those who support his trade agenda, as well as those who don’t, to wonder if this will be the point at which Trump begins to push his China trade agenda with vigor.  I wouldn’t bet on it.  There are many factors at play.  Below we review the main ones.

North Korea is still the priority

Although many people, including me, don’t’ think it is a good idea to mix trade with national security, the Trump Administration has signaled many times that China’s support on North Korea could lead to a more accommodating position on trade by the US.  North Korea continues to be a major security concern and all the indicators prior to this trip are that N. Korea will be the main focus, above and beyond trade.  For this reason alone it seems unlikely President Trump will use this opportunity to draw a hard line in the sand on trade with China.

In August the Trump Administration launched an investigation into intellectual property practices in China, ranging from outright theft to technology transfer requirements to weak IP protection measures.  This is certainly a critical aspect of America’s economic relationship with China so it makes sense to give priority to this topic.  But since the results of the investigation haven’t been announced, it is unlikely that this would be the right time to push for any measures on the part of China.  That’s not to say that day won’t come, but it probably hasn’t arrived yet.  Trump might raise this issue, but he likely won’t push hard, at least not yet.

Every five years the Chinese Communist Party has a huge meeting called the “National Congress” which is intended to announce leadership changes and lay out the government’s policy objectives for the next five years.  The most recent meeting concluded a few weeks ago.  The good news is that China’s president, Xi Jinping, firmly stated that opening more industries to foreign involvement remains a priority.  This statement gives Xi the ability to take actions that would be welcomed in Washington without appearing to concede anything since it was his idea in the first place.  On the other hand, Xi also stated that he wants the state-controlled part of the economy to be “bigger and better” which, in a sense, runs contrary to the statement about opening China to more foreign involvement.  So, at least rhetorically, Xi is on both sides of this issue.  We won’t know where he really stands until new policy initiatives are actually announced.  Xi could use this meeting with Trump to announce new reforms.   More likely he will wait to make major announcements, perhaps so he can better learn which policy changes would be most important to the US side.

We could argue all day long about the strength of the economy in 2017, including the labor market and stock market.  How much credit does the Trump Administration deserve?  Are we due for a recession?  Is the ongoing debt problem eventually going to drag the economy down anyway?  Putting those issues aside for now, a stronger economy does put less pressure on Trump to move quickly, even though he promised fast, decisive action.

The fact is that it takes time to make changes to trade arrangements.  First, although it isn’t always clear during a campaign, there are usually constituencies on both sides of any trade issue.  Steel companies like tariffs but car companies and appliance manufacturers and other steel consumers don’t.  Plus, although firm action is possible, it is difficult to completely disregard the reaction of the other side because their retaliatory actions could impact certain US industries harshly.  So Trump’s assurances relative to speed were never practical.   The most important thing is that we still don’t have a clear idea as to how far Trump is willing to go to turn his tough talk into policy.  The NAFTA negotiations might give us a strong indication in that regard.  Most likely this trip to China won’t.

Xi: Having his cake and eating it, too