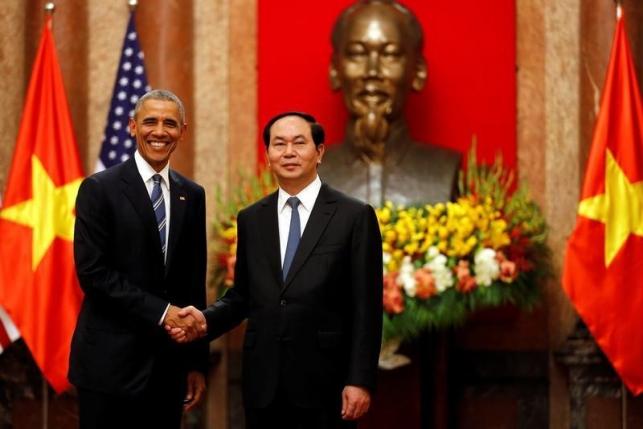 China seems to be in the process of learning what America already knows—being a superpower is much harder than it looks.

The US rescinding its arms embargo on Vietnam and the two nations discussing closer naval cooperation are just the latest signs of the closer alliances that are developing in the Pacific as a result of China’s territorial actions.  While the discussion of the South China Sea generally focuses on how far China will go and what the US will do about it, the more significant and lasting impact might be the exact opposite of what China wants—to further entrench the US in Pacific affairs.  In other words, in the case of China’s territorial ambitions, this might be a case of “be careful what you wish for…”

China no longer keeping its head down internationally

Since China’s opening began in 1980, as regards foreign policy, China followed Deng Xiaoping’s dictum to “keep our heads down and bide our time,” meaning that, until China had acquired the requisite economic might, it would tread lightly relative to global diplomatic and military affairs.  China’s current president, Xi Jinping, apparently thinks China’s time has come because he has been much more aggressive on a number of foreign policy fronts, most prominent being territorial disputes in the East and South China Seas.

For decades and even centuries territorial rights to small islands and reefs in these waters have been contested by multiple nations including China, Japan, Malaysia, The Philippines, Vietnam, and Brunei.  While some of these countries actually maintained small outposts on some of these islands, over the last three years China has upped the ante by more aggressively building structures on the islands that are not only larger but clearly useful for military purposes.  This has led the US to conduct military operations in the area intended to demonstrate that China’s unilateral actions will not be allowed to override international rules and laws and the claims of other countries.

More interesting is how other countries in the region have reacted.  Japan lifted its own ban on selling military hardware so it can help countries in the region counter Beijing’s moves.  The Philippines has filed a formal case against China’s actions in an international tribunal.  Indonesia very publicly burned 23 Chinese fishing vessels that it seized because the boats were allegedly fishing in Indonesian waters.  When China parked an oil rig off the coast of Vietnam in disputed territory, the Vietnamese people rioted and attacked China businesses and manufacturing facilities in China, forcing 3,000 Chinese to flee Vietnam via boat lift.  Plus, each of these countries have been engaged in two other activities—buying arms and developing closer regional alliances, often by engaging in joint naval exercises.

China and Vietnam not close allies to begin with

The warming of relations between the US and Vietnam is the latest, but by no means the only, example of this trend.  Even during the heyday of the communist period relations between Vietnam and China were never terribly cozy.  The two countries engaged in military hostilities along their shared border in 1980 and along one of those island chains (The Spratlys) in 1988, which helps explain why the Vietnamese people, not just the government, are distrustful of China’s territorial intentions.  This history also shows why Vietnam is so eager to turn to the US for help as it seeks to counterbalance China’s actions.

Money does not solve all problems

Part of China’s strategy has been to wave its wallet around while it advances its territorial interests hoping that the promise of market access and infrastructure spending will outweigh whatever opposition there might be to China’s actions.   So far it is safe to say that the other countries in the region are not taking the bait.  Nationalism seems to be trumping mercantilism in every case.   This wouldn’t come as a shock to America.  America is accustomed to countries ignoring its economic heft, as in the case of many Central and South American countries who have on many occasions preferred to chart their own left-leaning course as opposed to trying to take advantage of their proximity to the largest economy on earth.  The limits of economic diplomacy are perhaps less well understood in Beijing these days.  But they are no doubt learning fast.  Plus, adding insult to injury for China, Vietnam is poised to join the TPP trade agreement, which will bring it closer to the US and Japan while keeping China on the outside, showing that China isn’t the only country with a big wallet.

Could China lose even if it wins?

Should America and its allies take an even stronger stand against China’s actions in the South China Sea?  The White House, Pentagon, and Congress continue to debate that question and the upcoming election might push that debate in one direction or another.  Hopefully, whatever the outcome, open hostilities can be avoided.  In the meantime it is important to note the broader trend.  China is the largest country on earth, more than 4 times the size of any other country except India and at least 10 times larger than any country that makes a territorial claim counter to China’s.  This is why China always wants to address issues via bilateral negotiation and is always reminding the US to mind its own business.  The natural reaction of all other countries is to build alliances, as is happening in the South China Sea, so as to prevent China from dividing and conquering.  Currently, China has reasonably good relations, at least economically speaking, with most countries.  But its only close ally in the region is North Korea.  It has ignited a regional arms race, incited anti-China riots, made allies of former enemies, and united the region and most of the world against its actions.  Perhaps most importantly, it has made every other country more welcoming of America’s involvement in regional affairs.  It seems unlikely that China’s growing economy (which is wobbly these days, anyway) will reverse the sentiment that is driving the above trends.  It is reasonable to ask, even if China gets what it wants in the South China Sea, will it really like what it gets?