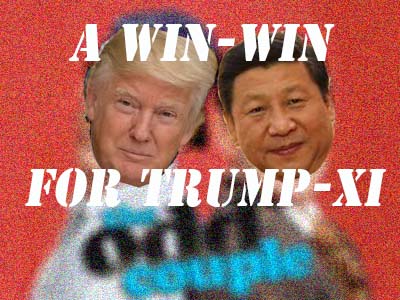 “I look forward to being with President Xi in the not too distant future. We will always have a good (great) relationship!”

Above is taken from a Trump tweet just yesterday (5/3/18).  Seems like typical Trump.  He puts a heavy emphasis on personal relationships.  It is likely truer in this case than others that the personal inclinations of both leaders will weigh heavily on the outcome of the current tensions and talks.  The two men couldn’t be more different, and yet have some similarities as well.

The Odd Couple: Politician vs. Businessman, Measured vs. Impulsive

Xi is a career politician, a classic insider from a political family, who carefully planned his steps to the ultimate position.  Trump is a career businessman, the classic outsider with zero government experience, who thrust himself into the leadership void at just the right moment and won the highest office in the land.

Xi is measured and cautious in everything he does, with each step seemingly choreographed to have the intended effect.  Trump is the most direct, undiplomatic, improvisational leader the world has seen in a long, long time.

On the surface, Trump and Xi are a perfect political odd couple—diametrically opposed backgrounds, personalities, and approaches.  The differences couldn’t be starker.

Similarities, too: Strong and Difficult to Read

But their similar attributes are likely more important in this case.  Both are considered by many to have the aim of being the strongest and most unilateral president their countries have seen in many years.  Both have also created an air of ambiguity around their economic and trade intentions.  This last point gives Trump and Xi the opportunity to turn the upcoming trade stand-off into one of the biggest accomplishments of their respective political careers.

Using words like “rape” and “heist” to describe economic relations with China, Donald Trump ran the most hardline campaign on trade in recent history.  Yet, after taking office, he decided to not designate China as a currency manipulator and also did nothing resembling his threat to place a 45% tariff on all imports from China, instead announcing that his administration would study China’s intellectual property violations and other issues before announcing a policy.

When Trump announced tariffs on steel and aluminum, it seemed like the first shot in a global trade war, until the administration began allowing exceptions and exemptions, a list which keeps growing.    What seemed like a broad tariff is now much more targeted and therefore much less objectionable.

The administration subsequently announced potential tariffs on more than $100 Billion of Chinese goods plus other potential actions relative to intellectual property and investment.  Yet again, Trump has wiggle room.  The measures against China don’t go into effect immediately.  The Trump administration will listen to comments from industry groups in the US that could be impacted.  Plus, discussions with China are ongoing, which opens the possibility of a negotiated solution.

Given the above, just how much of a hardliner is Trump on trade?  How far is he willing to push?  Would he actually blow up the global trading system?  Many have their own opinion.  But, objectively, it’s hard to say.

Xi: Promising both the free market and a strong state role

Xi Jinping is in a similar position relative to liberalization of the Chinese economy.  Rhetorically, Xi has championed the free market, famously saying that the market should be “decisive” in the economy.  Yet, he has also said that he wants China to have a strong state sector, which is the opposite of making the market decisive.  During his first five year term in office, Xi focused mostly on his anti-corruption campaign and consolidating power.  Economically, he slow rolled liberalization and strengthened the position of state-owned companies in several industries, neither of which is supportive of free markets.  Then again, he recently appointed a close associate who is known to be a strong free market proponent to be his chief economic official.  Pessimists think Xi’s power grab means all liberalization is on hold, including economic liberalization.  Optimists think his power grab has neutralized opponents to economic liberalization, better positioning him to take bold steps over the next few years.  Who is right?  Again, objectively speaking, it’s hard to say.

Both Xi and Trump are on the fence.  Which will show up?

So there they are, Trump and Xi, sitting on the fence.  Trump talks like he has no fear of starting a trade war, then acts more cautiously, more practically.  Xi talks like he wants to open China’s economy further, then drags his feet.  Together this presents the perfect opportunity for both men to confound their critics.  Broad, comprehensive liberalization measures by China would make Trump look like the hardnosed, effective negotiator he claims to be.  Those same measures would also make Xi look like the progressive, forward-looking leader he wants to be, leading China into its next stage of development.

From China’s side, there’s actually another interesting wrinkle to this situation.  China’s reformers have long said that outside pressure from trading partners like the US helps them advance their agenda in China.  The current situation is set up precisely to deliver this kind effect.

A Win-Win is possible

In the end, Trump could claim that, without his pressure, China would have never changed.  Xi could claim that he was going to implement new reforms anyway.  Neither could be proved wrong.  Both would have a major notch on his belt.  Isn’t that what makes for a great deal!