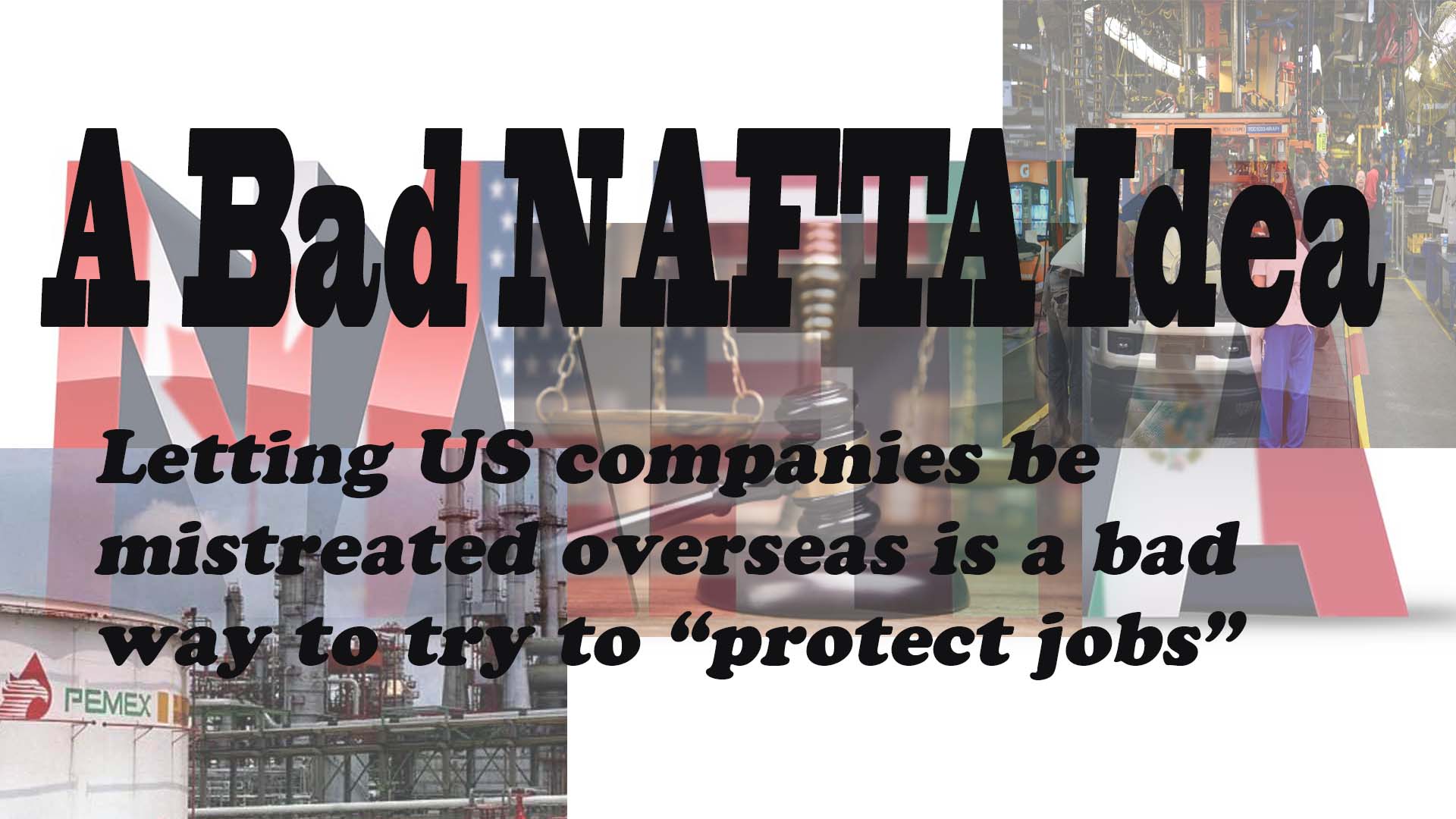 Would the Trump administration really deliberately leave American companies vulnerable to being cheated and mistreated overseas in an attempt to prevent them from moving jobs out of the US?  Does the Administration really think that would work?  Is that fair to American companies (and their shareholders, employees, etc.)?  This is a bad idea being contemplated for the wrong reasons.

The issue relates to NAFTA.  NAFTA includes an “Investor-State Dispute Settlement” provision that allows companies, under certain circumstances, to have commercial cases related to the treaty heard before an international arbitration panel, as opposed to courts of the country where the dispute exists.  It has been reported that the Trump administration wants to drop the provision from NAFTA because such protections make it easier for US companies to invest in places like Mexico.  In fact, US Trade Representative Robert Lighthizer, when asked about this issue at a congressional forum last year, asked, “Why is it a good policy of the United States government to encourage investment in Mexico?”

It is important to note that the ISDS provisions that are in many multilateral agreements these days were devised to help American companies (and companies from other advanced countries), not hurt them.  All developing countries, virtually without exception, have relatively weak rule of law, which means corruption tends to be high and courts are not as reliable as desired.  (The rule of law improves as countries develop, as it did in America.)  If Mexico changes a law in a way that violates NAFTA and disadvantages an American company, that company can utilize the ISDS system, as opposed to relying on Mexico’s court system.

ISDS system not perfect.  Should be improved, not scrapped.

In recent years complaints have arisen suggesting that the ISDS is a vehicle to subvert national sovereignty by giving an international tribunal power to make decisions that are binding domestically.   While I think some of these sovereignty complaints are exaggerated, there is legitimate reason to criticize the use of the ISDS in some cases.  That could likely be remedied by restructuring the ISDS process, not throwing it out.  Plus, if Lighthizer opposed NAFTA’s ISDS provision on sovereignty grounds then I would be more sympathetic to his position.  But as means to protect jobs by refusing to protect American companies overseas, this idea is the very essence of “biting your nose to spite your face.”

Listening to Donald Trump’s rhetoric, one gets the feeling that he thinks a trade deficit automatically means lost jobs and that, by extension, reducing a trade deficit by any means—tariffs, quotas, anything—would bring jobs roaring back to the US.  But if Trump really thought that was true, we’d have a 40% across the board tariff by now.  We don’t, which is just one indication that Trump’s approach to trade has been far more practical and balanced than his rhetoric.  It is also suggests that, deep down, Trump understands and accepts the main arguments for free trade—that tariffs and other such measures simply increase costs and decrease efficiency and productivity and that competing at home and abroad makes companies better which  benefits the consumer and enhances growth.  Considering some of Trump’s other policies, like the tax cut, he also understands that the best way to support jobs is not via protectionism but by making America a more competitive market and better investment destination.

Improving business climate in US, not restricting capital, is the right approach

The same logic applies to this issue.  Discarding ISDS to keep capital at home is basically an informal capital restriction—a way to slowdown the free flow of capital by making it riskier for American companies to invest overseas.  Capital restrictions don’t work for the same reason tariffs don’t work—they just decrease efficiency and productivity.  The better approach is to make the investment climate in the US as attractive as possible so America receives as much investment as possible.  America is already pretty good at this, as is evidenced by the fact that the US has been a net importer of capital for many years.  Tax cuts, lower health care costs, lighter regulatory burden in some areas—these are factors that could help the manufacturing sector in particular.

There’s one other reason scrapping ISDS doesn’t make sense in this case.  As relates to NAFTA and Mexico, it will have the greatest impact on the energy industry.  Mexico’s energy industry has long been dominated by the state.  Poor performance by domestic companies (further evidence that protectionism doesn’t work) finally convinced Mexico to open its energy market to foreign companies.  This presents opportunity to US energy companies and could also decrease US reliance on the Middle East and Russia.  In the energy business, you often have to invest where the energy reserves are located.  You can’t build a well or pipeline in Michigan to get oil or gas in or out of Mexico.  Plus, nationalization and other such risks are particularly acute in the energy field.  If companies think a solid ISDS provision will protect them, the administration ought to listen to them.  To drop the ISDS simply as a perverse form of capital control would be muddled thinking at best, and negligent at worst.